Ingresses and Load Balancers in Kubernetes with MetalLB and nginx-ingress 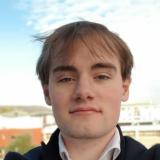 When it comes to exposing services from a Kubernetes cluster and making it accessible from outside the cluster, the recommended option is to use a load-balancer type service to redirect incoming traffic to the right pod. In a bare-metal cluster, using this type of service leaves the EXTERNAL-IP field of the service as pending, making it unavailable outside of the cluster. Comparatively, this is a native feature of Cloud managed clusters. Let’s find out how to achieve a similar result in a bare-metal cluster.

For the past few years, managed cloud Kubernetes clusters offers have thrived with the continuous growth of Amazon EKS, Google GKE and Microsoft Azure AKS. We like tinkering and experimenting, and we find it important to have flexibility when it comes to the way we orchestrate our clusters. We opted for a bare-metal cluster as they come with improved performance thanks to lower network latency and an overall faster I/O.

As our cluster is not cloud-dependent, one crucial feature that our cluster lacks is load-balancing. Load-balancers are in charge of redirecting incoming network traffic to the node hosting the pods. They redistribute the traffic load of the cluster, providing an effective way to prevent node overload. They allow for a single point of contact between the network and the cluster.

Only using an ingress controller would mean that you must expose a node to make your services accessible, effectively creating a single point of failure for your cluster if this node goes down. In MetalLB’s Layer2 mode, the IP address of the service is not exposing a node. Moreover, a node failover is provided, meaning that if the node on which the traffic is redirected falls, another node replaces it.

We are going to see how MetalLB and nginx-ingress result in the implementation of a load-balancer in a bare-metal Kubernetes cluster.

Before beginning the explanations, we need to make sure that your cluster follows the requirements:

How does MetalLB work?

MetalLB must be deployed on the control-plane. The control plane manages the resources of the cluster. For low scale clusters, it refers to the master node which acts as the orchestrator of the scheduling of the pods, selecting which node to assign the pods on, and managing their lifecycle.

The deployment of MetalLB on the control-plane creates pods for the following resources:

Then, the speaker pods are deployed with their corresponding listeners and role bindings. Each worker node receives a speaker pod, and one is elected using the memberlist to be responsible for routing the traffic. If the node containing the pod is down, another pod in another node is then elected to take its place.

In this tutorial, we are using the Layer2 mode. It involves using the Address Resolution Protocol (ARP) to resolve the MAC addresses of the nodes with IPv4 addresses.

Note: If your cluster uses IPv6 addresses, this mode uses the Neighbor Discovery Protocol (NDP) instead.

In contrast, the BGP mode, for Border Gateway Protocol, exchanges information with BGP peers in the cluster to provision the load-balancer type services with an address from one of the IP address pools.

Finally, the FRR mode is an extension of the BGP mode, allowing for Bidirectional Forwarding Detection support, making it compatible with IPv6 addresses.

Each mode has its perks and its downsides. The Layer2 mode is interesting because it provides node failover and redundancy. It is also the most easily configurable mode. Nonetheless, there are two downsides: bottlenecking and slow failover. To go more in-depth, this schema represents how MetalLB works with the Layer2 mode. It is important to note that some assumptions are presumed.

Let a cluster, composed of one master node and three worker nodes with:

When data comes through the load-balancer IP, it is redirected to the elected speaker pod. In this example, the metallb-speaker of the worker-node-1 was elected, allowing the pod to spread the information with kube-proxy, looking for the pod to access.

If the speaker pod node goes down, another speaker assumes its place. If we decided to add a second service of load-balancer type, its load-balancer IP would be 192.168.120.201, the next directly available IP.

Note: This mode doesn’t implement true load-balancing, as all traffic is directed towards the node with the elected speaker pod. BGP and FRR modes are more efficient for this situation, as they really dispatch the traffic as a cloud load-balancer would.

To practice the installation of MetalLB on your local environment, the following manifests must be deployed on the control-plane:

Once MetalLB is installed, we must configure an IP address pool. By deploying it, the controller allocates IP addresses for the load-balancer. The IP address pool allows for one or many IP addresses, depending on what we need. The allocated addresses must be part of the host network of our cluster and unique.

Note: It is possible to deploy more than one IP address pool.

To avoid any confusion due to the name of the server we deploy, in the remaining sections of the article, we name:

We deploy and expose nginx-server on a node to test if the installation of MetalLB was successful:

To access the load-balancer type service, we need to retrieve the EXTERNAL-IP of the nginx-server.

This is the desired result:

To clean up what we used during testing, we delete what we created:

In the previous part, we managed to deploy a service and make it accessible outside of the cluster. However, it is not satisfactory because a different IP address is allocated every time we deploy a service. We wish to be able to access every service from a single IP address. To achieve this, we use nginx-ingress.

Ingresses are a way to expose services outside of the cluster. It allows for hosts and routes to be created, thus allowing DNS resolutions of IP addresses. nginx-ingress listens and manages every service exposed on ports 80 and 443. It allows for two or more services to be exposed on the same IP address, using different hosts which means that a single IP is effectively used.

In cloud Kubernetes clusters, ingresses are exposed through load-balancers. In bare metal clusters, ingresses are usually exposed through NodePort or Host Network, which is inconvenient because it exposes a node of your cluster, thus creating a single point of failure. If this node goes down, the access to the services accessible through this node defaults on another node, meaning that you must change the IP address that you previously used, to another one of your nodes IP address.

Using both MetalLB and nginx-ingress allow us to get even closer to a proper load-balancer by layering the access to the services. The IP address remains the same, even if a node goes down thanks to the failover mechanism of MetalLB, and the services are now centralized thanks to nginx-ingress.

Using the previously set assumptions, we update the diagram as such: 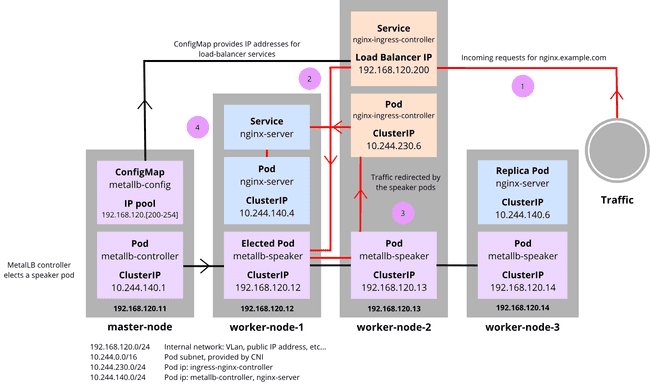 ConfigMap provides the IP pool to the load-balancer services, and the controller elects a speaker pod, as viewed previously.

2: Traffic exits the service to the elected metallb-speaker which communicates with the other metallb-speaker pods to redirect the traffic to the nginx-ingress-controller pod.

3: Traffic goes to the nginx-ingress-controller pod.

4: nginx-ingress-controller pod sends the traffic to the service that was requested with the hostname nginx.example.com. nginx-server is contacted and serves the website to the outside client.

We deploy the following manifest on a control-plane node:

Using this command, we check if the EXTERNAL-IP field is pending or not.

Normally, the first address of the config-map should be allocated to the ingress-nginx-controller.

To try out our new installation, we deploy two services without specifying the type which defaults to ClusterIP. First, nginx-server:

Follow the same steps for the deployment of an httpd server, which is similar to nginx-server and is simply a service that we expose, acting as a “Hello World”, on the httpd.example.com hostname:

Now, accessing the services is done on the same IP address using DNS. With curl, checking if the pages are working as intended is done by curling the nginx.example.com and httpd.example.com hostnames, or by opening your internet explorer with the hostnames on the host computer.

In case changing /etc/hosts is not possible, curling with a header indicating the hostname on the host computer in an alternative option:

You expect to see “It works” from httpd.example.com and the same thing as in the testing of MetalLB from nginx.example.com.

To clean up what we used during testing, we delete what we created:

First, verify that all nginx-ingress pods are up and running. You must wait for them to be ready, and this is done by using the kubectl wait --for=condition=ready --namespace ingress-nginx --timeout=400s --all pods command.

If this didn’t solve the problem, it was mentioned in this GitHub issue which dictates that a simple workaround is to delete the validating webhook configuration like so: kubectl delete -A ValidatingWebhookConfiguration ingress-nginx-admission.

Using a load-balancer in the form of MetalLB and using it in tandem with nginx-ingress to create a single point of contact for the services is now within your reach. It is convenient to use them as a failover mechanism for bare-metal and on-premise clusters. They are easy-to-use softwares, which, although they come with some limitations for the CNI, provide a great user experience, and are very easy to deploy.

Everything is not perfect, as it also comes with a slow response time, as well as possible bottlenecks due to the fact that it is not a true load-balancer distributing packets. It is still a useful tool that makes life overall easier.