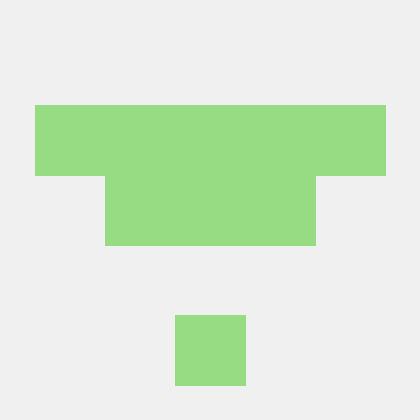 This is the third part of a four-part articles series:

The Python source code developed previously will now be rewritten into Scala code. Scala is a statically typed, compiled language which makes Spark applications written in Scala less prone to errors. Scala Spark applications integrate better with the JVM infrastructure that is likely already present in the company. Performance isn’t the motivation here, because PySpark applications using DataFrame API are usually almost as fast as its Scala counterpart.

The project can be found in the adaltas/spark-streaming-scala GitHub repository. It contains Scala Spark translation of the previous PySpark’s spark-streaming-pyspark project, as well as unit tests developed in this article.

The practice of writing automated tests is an important activity which improves the quality and the reliability of the software and its life cycle. In addition, they bring comfort to developers by reducing the time required for compiling and executing the code being written, making the programming process more fluid and responsive while ensuring the preservation of acquired functionalities.

All the points apply to the life cycle of a Spark application, as to any other piece of software. The continuous integration of a Spark application doesn’t differ much from the CI of any Scala application. It needs to be managed by source control software, automatically built, and tested. The continuous deployment depends largely on the target infrastructure and is out of the scope of this article. From all the DevOps practices, we will focus on the unit tests, the test coverage and the usage of a linter.

A unit test quickly verifies that a small, isolated part of the source code works as expected. The units of the source code that are being tested are typically functions of a class. Unit tests check that methods have specified behavior, especially in difficult conditions. The tests assure that a given unit of the source code complies with the specification.

Strictly speaking, any unit test must be completely isolated from the other unit tests and the external components. Based on this, one could argue that any Spark test is an integration test rather than a unit test. It’s a fair point since a test involving Spark needs a SparkSession, which is not only an external dependency but is also often shared between tests. Still, the most important part about the isolation of unit tests is the separate data between tests. It could be assured by creating individual mock DataFrames for each test, in which case it’s acceptable to call those Spark tests unit tests.

One should also write integration tests in custom solutions where different components are interacting. In some cases, frameworks already provide the connectors and integration tests aren’t necessary. For example, Spark supports Kafka hence this integration is already tested.

Unit testing of a helper function

In Spark applications, there are often functions that don’t rely in any way on Spark nor RDD and DataFrames. Those functions usually contain business-specific logic and could be tested independently from Spark. In the Python code developed in the first part of the series, a function isPointInPath() was created to verify if the point (x,y) is within a given polygon. The code below is a Scala implementation of this function.

The sbt directory structure must be respected. All Scala source code files and test files should be put in “src/main/scala/” and “src/test/scala/” directories, respectively. They could be put there directly, but grouping Scala files into Scala packages is a good practice.

ScalaTest framework will be used for writing those unit tests. ScalaTest is a popular workbench providing tools for testing Scala code. It provides high-level abstraction facilitating writing tests for Scala applications. Tests are written with one of the testing styles available in ScalaTest.

The code below is an example of PointInPolyTest.scala file with three simple unit tests following the FlatSpec style.

Whether you are using an IDE or the command line, the instructions on preparing the built.sbt file and running the tests are available on the official Scala website. ScalaTest can be used from sbt, but make sure to include the libraryDependencies += "org.scalatest" %% "scalatest" % "3.0.5" % "test" line in the build.sbt file. Running all tests should now display the above three tests passing. Those unit tests only verify the most important logic, more tests could be written.

All Spark tests need a SparkSession, the entry point of any Spark program. There are various strategies to test the SparkSession:

In any of those strategies, the tests are run locally. A Spark application in production is executed on multiple nodes in a cluster. Distributed applications need additional testing. For example, whether the code running on executors was parallelized correctly is an important matter.

Still, the execution on a local machine ensures that the application executes accordingly to the desired logic and complies to the specification. A streaming application processes data as events, but its logic could be unit tested as a Spark batch application. After all, both the batch and the structured streaming processing leverage the same Spark SQL engine and share the same API.

In the part 1 and 2 of this article, the first processing step executed on the Taxi data was about data cleaning. The purpose was filtering out Taxi rides that started or ended outside of NYC. The code below implements this in Scala and should be saved as “src/main/scala/com/adaltas/taxistreaming/processing/TaxiProcessing.scala” in the com.adaltas.taxistreaming.processing package.

Others processing on the Taxi data developed in the first part could be rewritten as additional functions in the TaxiProcessing object. We shall test only the cleaning of the Taxi data and consider the source code ready.

We want to test that applying the processing on a DataFrame returns the expected result. A SparkSession is needed to handle the DataFrame and data to process with expected results. From the Spark testing strategies described previously, the second one will be incorporated.

The preparation for Spark unit tests on Taxi Data

Let’s prepare a test suite “src/test/scala/com/adaltas/taxistreaming/processing/TaxiProcessingTest.scala” that tests main processing logic on the Taxi Data. To run any tests relying on DataFrames, Spark is needed. As a mean of providing SparkSession, a trait SparkTestingSuite is defined. It extends the ScalaTest’s FlatSpec and BeforeAndAfterAll.

Now, any traits extending SparkTestingSuite will gain access to the Spark session through the sparkTest variable.

Tests should be simple and short, hence the boilerplate code in tests should be avoided. The trait TaxiTestDataHelpers defined below provides helper functions to create datasets and generate DataDrames that individual unit tests could use. Consequently, it strips the repetitive code. Note, the TaxiTestDataHelpers trait extends the SparkTestingSuite, providing access to the Spark session.

The build.sbt file needs additional setup for Spark. Forking must be enabled to run Spark in a separate JVM. By default, the code runs on the same JVM as sbt which creates a risk that Spark will crash sbt. Overall, the project is build with the sbt configuration as below:

It’s also useful to hide INFO log level messages from tests. This could be done by copying Spark’s conf/log4j.properties.template file to “src/test/resources/log4j.properties” and changing the line:

Testing the Taxi processing with Spark

Once the SparkTestingSuite and TaxiTestDataHelpers traits prepared, Spark unit tests on Taxi analytics could be written quickly and concisely. The testing of the data cleaning related to the east side of NYC is covered here. On the image below, there is a bounding box of NYC (minus Staten Island borough). Since the parameters are coordinates, the meaning of the corner and edge cases is easy to see. 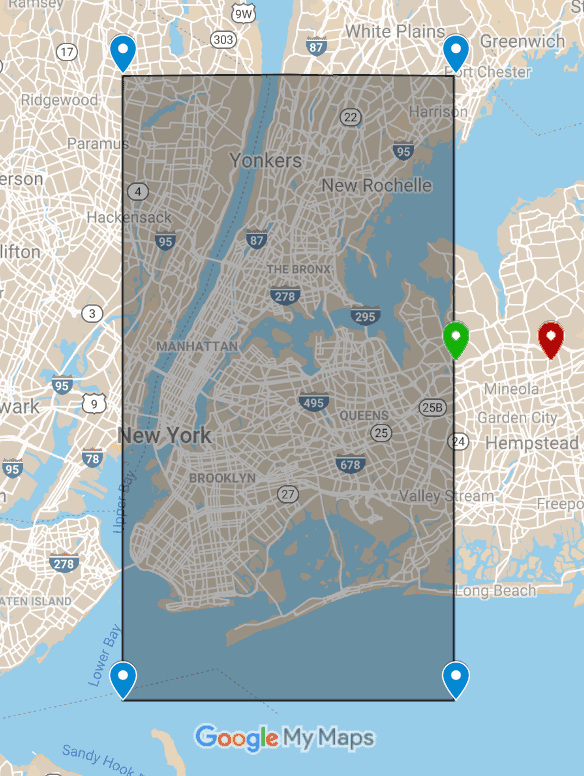 Two illustrative unit tests corresponding to the east edge case are written in the code below. The identical approach could cover the north, west, and south cases.

The rest of the logic of the streaming query could be added in TaxiProcessing.scala and tested in the same fashion by adding new functions to the TaxiProcessingTest class and utilizing another helper functions in the TaxiTestDataHelpers trait.

Linters are tools used to analyze code for potential programming and stylistic errors. The use of linters is considered as a good practice in the software development process. The examination of the source code with linters is important to identify as many code smells and suspicious code constructs as possible before the application goes into production. Linters have more uses than only avoiding errors. Linter rules can enforce a unified format and compliance with project-specific style guidelines. The consistency in the applications’ code is especially important in enterprises, where numerous people from various teams collaborate within a single project.

Scalafix is a Scala linter which runs after the compilation. Firstly, it statically analyses the source code to find bad patterns specified by the linter rules. Secondly, Scalafix corrects the issues it found through refactoring.

To install Scalafix, add the line below in the “project/plugins.sbt” file:

As an example, consider the RemoveUnused Scalafix rule. Before running the linter, add the following options in the build.sbt file:

Scalafix can be launched through sbt with a command:

If any unused imports in the project’s code have been found, they are automatically removed by Scalafix. Other built-in rules can be used, as well as custom rules could be implemented.

An alternative to Scalafix is WartRemover, which is a lint-on-compile type of linter. Since it runs at the compile time, it’s considered interactive and flexible. Another advantage of WartRemover is a richer set of built-in rules, denoted warts.

Other linters include Scalafmt and scalastyle which, while providing limited features, integrate with IntelliJ IDEA, one of the most popular IDE for Scala development.

The test suite must cover all the code and its supporting features. The appropriate test coverage of the code is important. A high percentage of the source code being tested is a good indicator that the application will work as expected, but it’s not the ultimate metric describing the quality of the application. If the tests were written for the sake of testing, high test coverage is delusional. Above all, tests should be meaningful and verify the expected functionalities.

Code coverage can be measured according to various criteria. A classic metric is the line coverage, which indicates how many percents of the code lines has been tested. Other examples are function coverage, branch coverage, and statement coverage. Scala isn’t a verbose language. It could have multiple statements on a single line. Thus, testing Scala code according to statement coverage provide a more accurate results than using an approach based on the line coverage.

Measuring the code coverage with sbt-scoverage

The command below runs all the tests with coverage and generates a report:

The locations of HTML and XML reports generated by scoverage are indicated by sbt after running tests. An example HTML report that can typically be found in the “scoverage-report” directory is presented below:

The report shows that all the statements in the source code developed in this article were invoked during tests. If the static reports aren’t sufficient, Scoverage can be used with SonarQube to provide code coverage results for continuous inspection within SonarQube.

Testing in software engineering is important, as in any other engineering project. Automatic unit testing is the most fundamental approach to test software. The tests must be short, isolated, and precise. With an adequate testing strategy, a Spark application could be tested almost as easily as a regular application. This article demonstrated how Spark unit tests could be written on the example of the Spark code developed in previous parts of the series. To rewrite and test the remaining source code from the previous parts, the presented methodology would remain the same.